The recent Supreme Court decision to strike down limits on federal campaign contributions, following on the heels of Citizens United a few years ago (here’s an animated analysis), has left me feeling particularly urgent about the need for a childhood social change activism library.

Citizen voices are becoming increasingly drowned out in the political system by the unchecked resources of wealthy people and corporations.

So which stories can we share with children about how people can work together to amplify their voices? What can we offer to our kids so they will be equipped to push back? (Of course, there are there are many experiential approaches for introducing young kids to activism. Here, I’m focused on picture books that can teach strategies and illuminate pathways for social change.)

Our libraries need to be stuffed full of many possible approaches—from marches to creative actions to litigation. We need to share stories that introduce children to inspiring leaders and community groups and show them what movements look like. Over the next few months, I’ll talk about a variety of picture books that can be a part of this.

I thought I’d start here with an old picture book—old-fashioned but lovely—that teaches children about a very specific policy strategy. 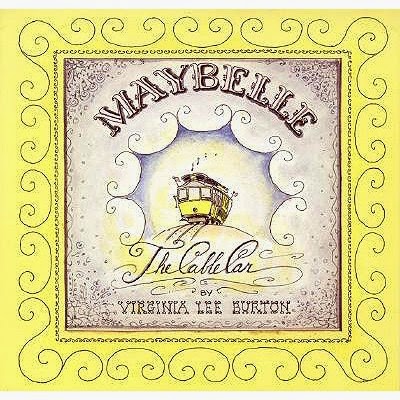 Maybelle the Cable Car by Virginia Lee Burton (Houghton Mifflin, 1952) is on one level a picture book about a beloved vehicle. On another, it is a great introduction to how ballot initiatives work, based on actual events.

Burton is fantastic at personifying vehicles (see also Katy and the Big Snow, Mike Mulligan and His Steam Shovel), and she does this skillfully in Maybelle. The clanging street car goes up and down the hills of San Francisco,  “No hill too steep for Maybelle…”

Even though “The City had been so busy growing/she had neglected her little cable cars/and they needed a new coat of paint./Maybelle was always first out in the morning/and last to come in at night./She loved her City… she loved her work/and most of all she loved the people.” 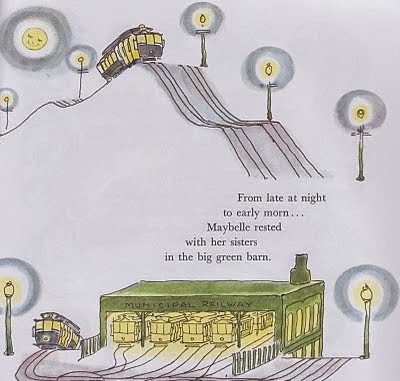 One day, Maybelle learns from a bus, Big Bill, that the City Fathers want to get rid of the cable cars—“you’re too old and out of date/much too slow and can’t be safe…/and worst of all YOU DON’T MAKE MONEY./What they want is Speed and Progress/and E-CON-O-MY… and that means US.”

At this point in the story, Maybelle and “the people” are set in opposition to the “City Fathers” and what they represent as spelled out by Big Bill.

So what will people in the book do about it? Will they sit by and let the City Fathers retire Maybelle and the other cable cars, or will they stand up and speak out?

When news gets out, most are resigned, but one voice poses a challenge: “one person said… ‘Why do we have to?/We, the people, are the City./Why can’t we decide?’”

Significantly, it takes just one vocal person to get things moving. 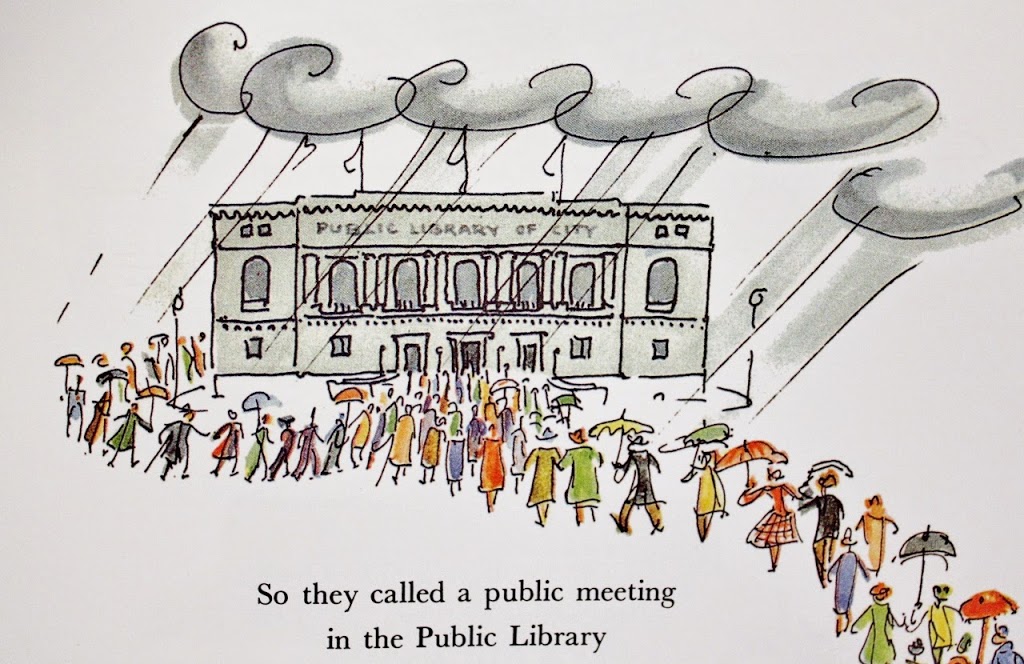 A public meeting is called and The Citizens Committee to Save the Cable Cars is formed. Support comes in through letters and telegrams. Momentum grows. Ultimately, the Committee petitions City Hall to put a question on the ballot.

Burton’s illustrations help show how many people become involved and the variety of tactics they use to garner support and challenge opposition. People march with the banner, “Save the Cable Cars.” An airplane flies with the message, “Vote Yes On Question One” (a yes vote would save Maybelle and the other cable cars).

Even if one side makes more noise, it’s possible for the other side to raise the volume even higher, to work even harder. 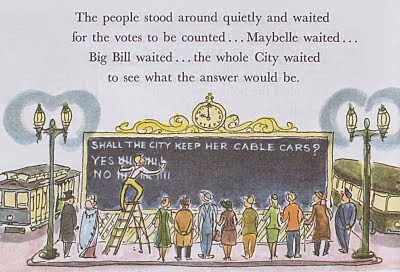 Burton gives us a detailed rendering of Election Day so we won’t miss anything. A series of frames show people coming and going from the polls. Votes are counted with tally marks on a blackboard across multiple images.

When the cable car supporters win, Maybelle is covered with flowers, gives free rides to all, and lets her (cable car) sisters know, “Our day’s not done… it’s just begun.”

I think this book is a valuable part of an activism library for the process it illustrates.  Ballot initiatives can be an important strategy for citizens to shape policy at the local level. Sometimes, they can even have far-reaching consequences that impact national policy.

Sure, there’s a 1950s schoolhouse democracy at work in Maybelle. And ballot initiatives can be manipulated by the influx of money in the political system.

But even if the campaign to save the cable cars is rather neat, the story shows what it can look like to put in the time to organize, petition, march, debate, and work hard to win. These tactics still hold true-no matter how much money is influencing the system.