I spoke with Innosanto Nagara in 2013 when A is for Activist first hit the shelves. Inno brought this debut picture book into the world through a successful crowdfunding campaign, which then led to publication with Seven Stories Press in English and Spanish, as well as the recent release of a Swedish edition. I’m always pleased when I walk into the children’s section of a bookstore and see the familiar cover. With 50,000 copies now in print, A is for Activist continues to shine.

So I was thrilled to catch up with Inno this week about his brand new children’s board book, Counting on Community (Seven Stories Press, 2015). It is a wonderful complement to his debut. Again, Inno skillfully couples rhythmic picture book phrasing—”Five chunks of chalk on the sidewalk”—with bright illustrations that invite readers in to participate and play. This time, through the familiar structure of a counting book, readers learn about what it can mean to live in a cooperative and diverse community. Counting on Community is the perfect addition to a childhood activism library. 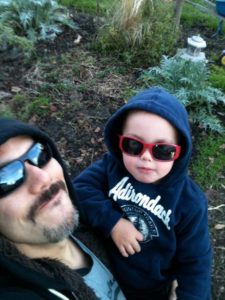 Innosanto Nagara with his son

The way you express “community” on these pages feels very specific and personal. For example, right on the “one” page, a whole crowd reacts to a piñata (“One stuffed piñata for every holiday”) but each person has a unique gesture or expression. Can you talk about the community you’ve illustrated in this book?

This is an image that started with a photo of my son’s birthday party in the yard of our co-housing community. Many of our friends will recognize their kids in the image, and the varied expressions are basically what was captured in the photo. But I did add some additional “characters” for composition and balance. No single image can capture the possibilities of what “community” can look like in a literal sense. But community is about people coming together, so I wanted to lead with an image that represented that concept. Later I illustrate how it can also be about alone time (with chalk on the sidewalk, for instance), the stuff we share, the activities we do together, and the values we live. But most importantly it’s about people in our diversity. 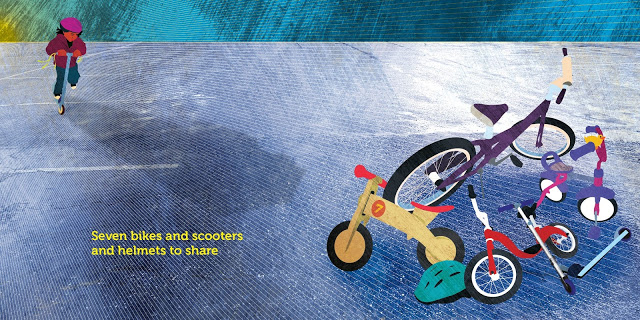 I love the concreteness of “Seven bikes and scooters and helmets to share” with a pile of gear just waiting to be used. This value of living in community is so relatable for a child!

And then I think you take such an interesting turn. To go from the pile of gear to “Eight picket signs showing that we care” is so powerful. You’ve handed everyone a picket sign in the illustration, as if the picket signs, too, had come out of a shared pile. Did you think about the relationship between these pages?

Sharing is a big theme for me. I can’t stand how “the sharing economy” has been coopted by private companies that use their apps to undermine community set standards around environmental, safety, and working conditions. Sharing is about not everyone having to own their own everything. Sharing is about our kids developing core emotional skills and empathy. Sharing is about reducing waste. Sharing is about all of us or none—solidarity. I didn’t grow up in this country, but one of the biggest challenges I’ve had with raising my child in the U.S. has been trying to do this against the tide of individualist messages we are bombarded with. We are lucky to live in community ourselves, and he will grow up knowing that his experience was made possible by the fact that we’ve been able to do it together with others. But you’re right, the idea is that there is a common thread between the idea of sharing our stuff and taking action to ensure access for all.

You chose to leave the picket signs blank. Can you talk about that?

Originally I had thought of putting in timeless slogans representing progressive values. “My Body My Choice”, “Black Lives Matter”, “Food Not Bombs”, etc. But that didn’t work because it would mean reducing the fight for social justice to eight slogans. My previous book, A is for Activist, was where I got to share 26 visions of the movement. Counting on Community is not a counting version of A is for Activist. Where A is for Activist was about the issues, Counting on Community is about how we live. So I decided to leave the picket signs blank and encourage each family to fill them in with the messages they come up with themselves.

Like your text, your artwork is so layered. How do you construct your illustrations?

Thank you. I love the word “layered” because it’s the best way to describe what I’m trying to do. The layers in the text are important because these books need to be interesting to both the children and the adults who read with them. I want the adult to be able to read the book over and over without getting bored and I want the children to be able to find new understandings as they re-read and revisit them at different developmental stages. Bored adults can’t convey a love of reading. Flat images that leave nothing for a child to discover tomorrow end up gathering dust on the shelf.

But to your question on technique, I usually start my illustrations with a sketch or a photo that I hand-trace in a vector illustration program. This allows me the crisp outlines and the ability to work and rework it until I get everything exactly how I want it. Then I take it into a photo editing program, where I literally place each element into it’s own layer. Then I place scans of textures and colors into overlaying layers. Then I add in lighting and shading layers. So literally, the illustrations are created in overlapping layers. I spend days trying to get the balance of composition, text, depth and lighting just right through adjusting these elements in each layer for each image.

On the final page, your play on the word “counting” is lovely (“So what can you count in your community? I can count on you, and you can count on me!”). It’s simple and goes to the heart of the book. Did you start with this idea or did it come about through the writing process?

That was always the core concept. After the success of A is for Activist, people asked me what I was doing next, and for the longest time my answer was, I don’t know, maybe nothing. I didn’t get into this to become a children’s book author. I did it to have the book that I wanted for my child. It turns out it was useful to others as well. But with it’s success, I didn’t want to just write another book just to do it. As I said earlier, I didn’t want to do a counting version of A is for Activist and then a colors version and then a shapes version. So I always said that if the right idea came up, I would do it. But otherwise, maybe nothing. When that idea did hit—the double meaning of the word “counting”—that was the book.

My son is now 5 and is into picture books and chapter books. I hadn’t thought of myself as much of a storyteller so I had been trying to find someone to partner with who had the right story that I could illustrate. But through a series of unusual events, my publisher became aware of a story that I have told about an incident in my childhood in Indonesia. My father is a dissident playwrite, and the story is set in Indonesia in 1978. It is a story about colonialism, power, and art for social change. The title is My Night in the Planetarium but more on that one in 2016.

Despite my own book, I don’t necessarily think a book has to be explicitly about activism to be about the core of what activism is, which is agency. That being said, my current favorite book about activism is Joelito’s Big Decision by Ann Berlak and illustrated by Daniel Camacho. Full disclosure, I got to see an early version of it, and was so excited about it I ended up helping with the cover design. But that’s not why it’s a favorite. I love it because it is a story that is both explicitly about a particular action, but also about fairness, and a child’s choices.

I’m also really excited about another book by an Oakland team, I am Sausal Creek by Melissa Reyes and Robert Trujillo. This one is told from the perspective of a creek that flows through Oakland, but it is also about the history of the land and it’s people, colonization, the environment, and ultimately, through resilience, what one can do.

Also in regular rotation at bedtime for us is We March by Shane Evans. It’s a wonderful approach to introducing the fight for racial justice from the perspective of a child whose family prepares to join the March on Washington. What I love about it the most is the conversations that it has started in our home. Why were they marching? Who is that person? What is a leader? Another beautifully layered story that leads to conversations, rather than attempts to conclude them.

There are so many others, but that would turn into it’s own article, so I’ll stop there.

Thank you for the work you do! There is a movement afoot to push the children’s book genre out of the bland corporate monolithic industry that it has been, and this movement can only flourish when people like yourself put in the work to shine a light on it. 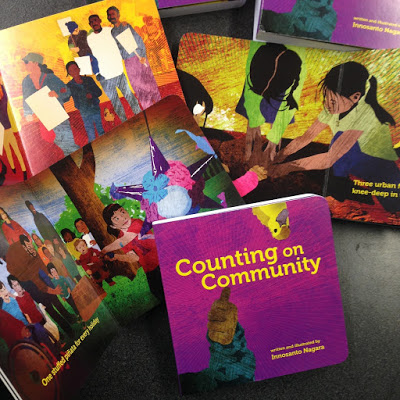