The inspiring biography of Ghanaian artist El Anatsui whose handmade sculptures, created from discarded bottle tops, have received international acclaim and been showcased around the world.

​”If you touch something, you leave a charge on it and anybody else touching it connects with you, in a way.” — El Anatsui

El Anatsui has always written his own story. As an art student at the University of Ghana, El noticed that the artists and styles he was studying were grounded in European traditions. Curious about his own culture’s art history, El observed his people and found stories in the fabrics they wore and the way they used recycled goods. He decided to tell these stories through his artwork.

El experimented with different mediums—firing broken clay into new pots and cutting wood into sculptures using a chainsaw. Each time El tried something new, he brought with him the experience of all the experiments he did before. After coming across a discarded bag of shimmering bottle tops, El wondered What was their story? He experimented with the new material—disassembling, flattening, and reshaping—then stitched the tops together with wire. The result were large, flowing tapestries that tell stories about history, culture, and link people together. Today, El’s bottle top sculptures are showcased all over the world inspiring audiences everywhere.

Here is the captivating story of a Ghanaian sculptor whose passion, creativity, and awe-inspiring artwork reminds us that creating powerful art is about being true to yourself.

STARRED REVIEW “When El Anatsui was a teenager, his home, a British colony, became the independent country of Ghana. “We could decide to do things on our own terms,” comments the artist, with the shift reflected in his outside-the-box creativity and changing old materials into something new. This striking book, vividly illustrated in paint and cut-paper collage, showcases Anatsui’s signature works: flowing tapestries made from deconstructed bottle tops. Goldberg describes the artist’s early life and artistry and then focuses on how he executes his famous fabrics, which have been exhibited in museums worldwide. As well as learning about Anatsui’s art, readers can gain here some important insights into the creative life—Goldberg emphasizes that Anatsui doesn’t work alone; a team gets the bottle tops into their new forms. It is also instructive to learn that the artist (who reviewed Goldberg’s text) isn’t always sure how to proceed artistically or that the results will be popular. Best of all, readers will find out that nobody in this man’s town was an artist, but he still found his way to success. Robust back matter includes source notes, citations for quotes, and an art activity. Use this excellent biography alongside Shelley Pearsall’s The Seventh Most Important Thing (2016) in units on found-object art; it also deserves a place on public library shelves.” –Booklist

STARRED REVIEW “Ghanaian sculptor El Anatsui said, “If you touch something, you leave a charge on it and anybody else touching it connects with you, in a way.” Anatsui didn’t physically touch Bottle Tops, but his work clearly charged author Alison Goldberg (I Love You for Miles and Miles) who in turn electrifies her audience with this inspiring biographical picture book. Accompanying Goldberg’s stimulating narration are striking, dramatic illustrations from Elizabeth Zunon (Bedtime for Sweet Creatures; One Plastic Bag). Together, the creators produce an engrossing introduction to a monumental African artist. Anatsui found deep meaning in an ordinary, discarded object: “With bottle tops, he had found a material close to hand that evoked his history and environment. They had a past, and could have new meaning too.” Goldberg guides readers through Anatsui’s career, showing his creative evolution, his “idea of including the memories of old objects in his art” and his desire to connect his pieces with the history of his people. The artist’s passion for telling stories in sculpture is inspiring, and the charm of the book is enhanced by his quotes woven throughout. Zunon takes a similar approach to the illustrations that Anatsui takes to art: Anatsui stitched the parts of bottle tops together to make his sculptures portray texture and dimension. Zunon fittingly patches together paint and cut paper collage–thus developing the same artistic elements–to depict him and his incredible creations. In the spirit of Anatsui’s work, Goldberg includes an activity at the back of the book, a brilliant addition to enhance the experience of learning about art. From cover to cover, Bottle Tops is a sensational reading experience.”–Shelf Awareness

“This picture-book biography is a fascinating introduction to Ghanaian artist El Anatsui and his innovative artistic process. Early pages present Anatsui’s childhood love of artmaking in the British colony of the Gold Coast. When he was a teenager, in 1957, his country achieved independence as the nation of Ghana, and Goldberg stirringly writes, “With this new freedom, he felt a shift.” Anatsui’s own words follow: “We could decide to do things on our own terms.” Words and pictures guide readers to see how liberation on this national scale translated into Anatsui’s artistic quest to freely express himself by experimenting with diverse media and developing new techniques. Zunon’s (I Am Farmer, rev. 1/19; Grandpa Cacao, rev. 5/19) use of paint and cut-paper collage is particularly well suited to depicting Anatsui’s life and artistry; it echoes his own evolving process of using found materials and assembling them in his artwork. Throughout, the illustrations’ style is largely realistic, and shifts in visual perspective invite the reader to home in on pivotal moments. For example, when Anatsui finds a discarded bag of bottle tops at the side of the road, Zunon spotlights him holding one. The next spread eschews background detail to show Anatsui’s hands manipulating the bottle tops as he develops a technique for creating the massive, fabric-like sculptures that brought him international acclaim. Back matter provides additional context and sources while inviting readers to get their own hands involved in creating art.” –The Horn Book

“Fascinated with the artistic and political potential of turning discarded objects and scrap into art, Ghanaian artist El Anatsui (b. 1944) incorporates “materials with a history” into his work, as detailed in this process-oriented picture book. Following his country’s independence from Britain, Anatsui finds a torn garbage bag filled with bottle caps, “shining silver, red, yellow, and blue,” and discovers that by disassembling them, flattening the bands into strips, and then connecting the strips and the circular tops, he can create huge swathes of material that visually favor traditional kente cloths. Resembling “an enormous, shimmering cloth” (one piece is 30 feet tall), El’s work tells stories of colonialism, interpersonal contact, and resilience—and takes the art world by storm. In straightforward prose, Goldberg weaves a story of art and ingenuity about an artist who “has always written his own story.” Zunon’s richly hued paint and collage art, meanwhile, chronicles both the excitement and slow work of creating a wholly new artistic medium. Back matter includes an author’s note and an art activity. Ages 7–11.”–Publishers Weekly 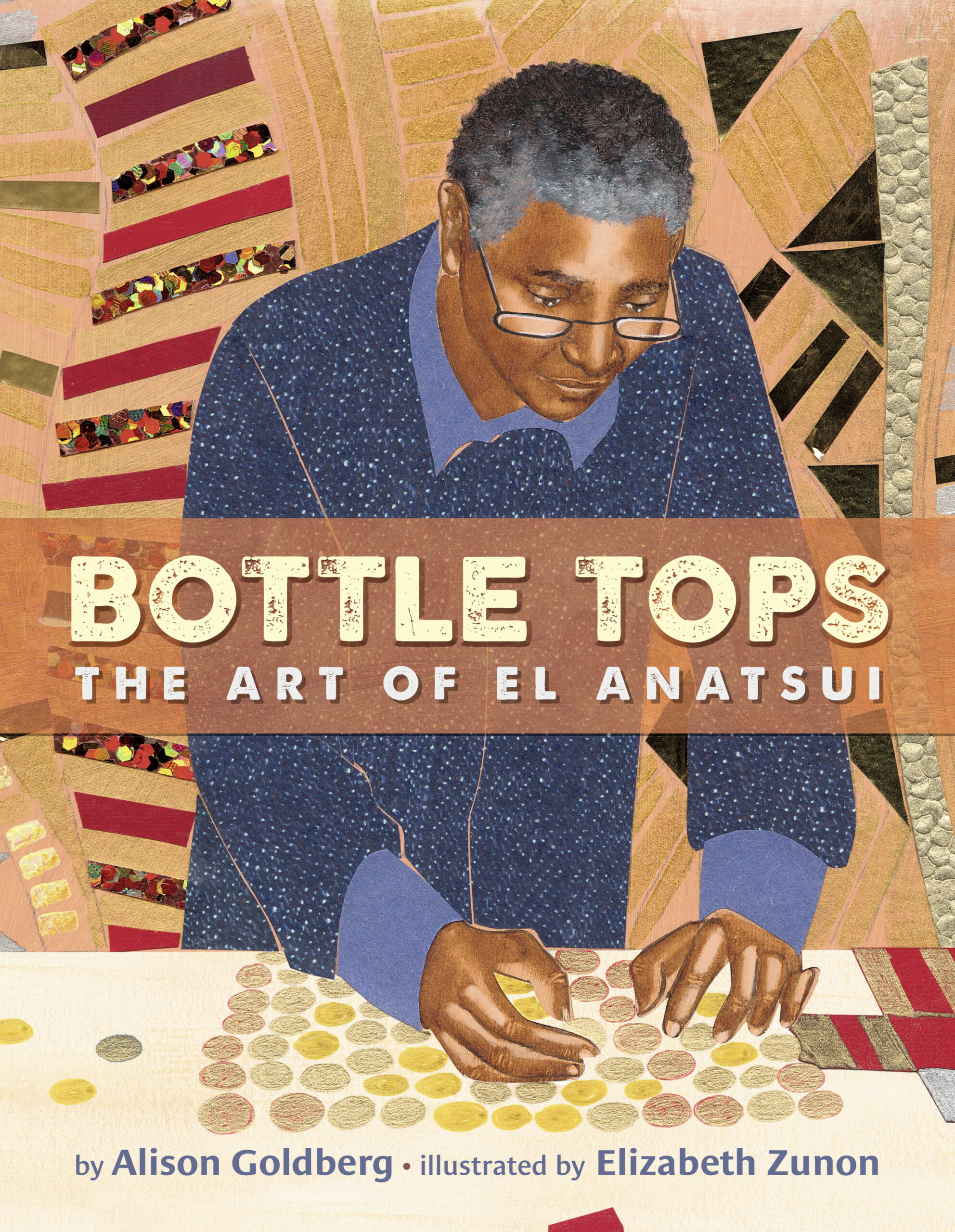 Watch my interviews with illustrator Elizabeth Zunon about her creative process and the materials she used to illustrate Bottle Tops! We’ve created six short videos for classrooms.

This is the first in the series:

Watch the step-by-step guide for making the art activity in Bottle Tops, using the foil lids from yogurts and other used food containers. Detailed instructions for this activity are included in the book.