Jane Kohuth’s new book, Anne Frank’s Chestnut Tree, is an ambitious project. Not only does Kohuth broach the challenging topics of war and oppression in picture book form, but she also does this within the boundaries of an early reader. In Kohuth’s hands, accompanied by Elizabeth Sayles’ descriptive illustrations, this is skillfully done.  Anne Frank’s Chestnut Tree is published by Random House, 2013.

What brought you to this subject?

Though I studied Jewish women’s history in graduate school, I never anticipated writing a book about Anne Frank. But the Random House editor with whom I had worked on two previous books (The early reader Ducks Go Vroom and the picture book Estie the Mensch), asked me if I would like to write an Anne Frank biography for the Step Into Reading biography series. It took me a few days to be sure I wanted to take on this challenge. To write a book that was both honest and age-appropriate, about a girl who had written so beautifully about herself, all in one thousand words, was quite daunting. I thought about my own Holocaust education, which took place mainly in Hebrew School. My third grade teacher could have used a book for our age group when she took on the difficult responsibility of introducing this dark period in Jewish history. I felt that Anne Frank, a child herself, would perhaps be someone whom children could connect to and understand. And I hoped children who read the book would later want to read Anne’s diary.

How did you research the book?

I started by reading the Definitive Edition of the diary. I then read biographies, books that focused on the publication and history of the diary, and the handful of children’s books I could find that had been written about Anne (mainly chapter books). I also looked at the Critical Edition of the diary, which contains articles and all three versions of the diary text — the original, the version Anne edited for publication before her arrest, and the version edited and published by Anne’s father. I also combed the internet looking for news articles about the chestnut tree to find out what had happened to it in recent years and what plans were in place for the planting of its saplings. As I read, I made notes and wrote down my thoughts for how I could structure the book.

To tell Anne Frank’s story, you navigate topics of war, oppression, and death – all challenging for a children’s book… What were some of the writing challenges you faced?

Creating this book is the biggest writing challenge I’ve ever faced. It might be better to ask, what wasn’t challenging about writing Anne Frank’s Chestnut Tree! The subject matter, the strict rules and space restrictions of an early reader, and the challenge of trying to live up to Anne’s own fine writing all combined to make this a tough (but interesting) experience. My early drafts were many times longer than they needed to be. There was so much I wanted to share about Anne! My breakthrough was perhaps in deciding to think of the text as a poem. Every sentence, every paragraph had to be as spare and beautiful as I could make it. 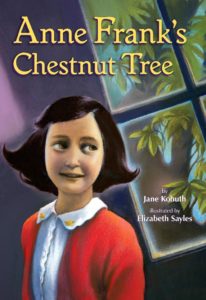 I think the way you handle the term ‘concentration camp’ is very skillfully and sensitively done: The Nazis wanted to send her to a concentration camp. Anne’s parents knew that when Jews were sent away, they were never heard from again. You don’t define exactly what it is but you get the point across. Similarly, you write, Anne did not survive the war. But her diary did. After acknowledging her death, you bring the reader immediately to a place of hope.

The Chestnut Tree is a powerful symbol of hope and so wonderfully connected to the legacy of Anne’s diary. At what point did you decide to focus on Anne’s relationship to the tree?

Step Into Reading biographies, in part because of their length restrictions, focus on one story or aspect of their subjects’ lives. I needed to choose a focus for my biography, so when I began researching, it was with an eye to finding a lens through which to construct the book. My editor, in an early conversation, mentioned the tree, so I kept it in mind. I noticed that Anne frequently wrote about what nature had come to mean to her, both in diary entries and in separate stories (which have been published as Tales from the Secret Annex). I presented several ideas for how to focus the book to my editor, and we ended up choosing to focus on nature and the chestnut tree. The tree was a wonderful way in which to show that Anne’s story was not just encompassed within her lifetime, but that it continues. Just as the chestnut tree now has a presence around the world, so does Anne, and she continues to inspire new generations to empathy and a desire to stand on the side of justice.

At the end of your story, you state: History is not just dates and places. History is people. It’s children like you, speaking to us. Anne Frank’s voice comes to us from a terrible time, out of a terrible place. It’s a gift that shows us that you can keep trying to be a good person, even when so many people have decided to do evil.

What do you hope children will take away from this story?

I hope that children will see that their voices can matter. Even when they feel powerless and it seems unlikely that anyone will ever hear them, they should hold onto their voices, speak up, write or sing or make art from the truth of their lives. They may help one person or they may end up speaking to millions, like Anne did. I also hope they see that even when the majority of the people around them are saying and doing things that are unjust, cruel, or outright evil, if they listen, if they look, they will hear and see the other people, the ones who are crying out for change and the ones who work quietly every day for good.

What are some of your favorite children’s books that have activism themes?

Miss Rumphius by Barbara Cooney is about the obligation to do something in one’s life to make the world a better place. It makes the reader think about what unique contribution he or she can make.

I also like children’s biographies about women who have changed the world for the better — especially women who have worked on making the world a more just place for girls and women. Here Come the Girl Scouts: The Amazing All-True Story of Juliette “Daisy” Gordon Low and Her Great Adventure by Shana Corey has stuck with me. Though I was never a Girl Scout, I now have great admiration for what the organization did for girls in a time when women weren’t encouraged to be active, resourceful, and independent, and for what they still do today.

I’m also a fan of the picture book As Good as Anybody: Martin Luther King and Abraham Joshua Heschel’s Amazing March Toward Freedom.